Crawl spaces are a huge market in the USA. In states like Tennessee, Kentucky, Virginia, Maryland, North Carolina, and many others, crawl spaces are commonly found in newly built homes.

Crawl space renovation is another popular niche, as many owners of existing crawl spaces want to minimize heat loss and moisture issues below their homes.

So, whether you’re building new homes or renovating, the demand for well-insulated crawl spaces is high.

Thus, it pays to know which insulation strategies — and products — are best suited for insulating crawl spaces. And that’s precisely what we will cover in our post below.

2 Decisions Owners Make When Building or Renovating a Crawl Space

Homeowners have the following two decisions to make when insulating a crawl space, whether it’s being built or renovated:

There are two ways to insulate a crawl space — insulate under the floor, or insulate the walls of the space, thus sealing it from the elements.

Option 1 — Insulate the Underside of the Floor 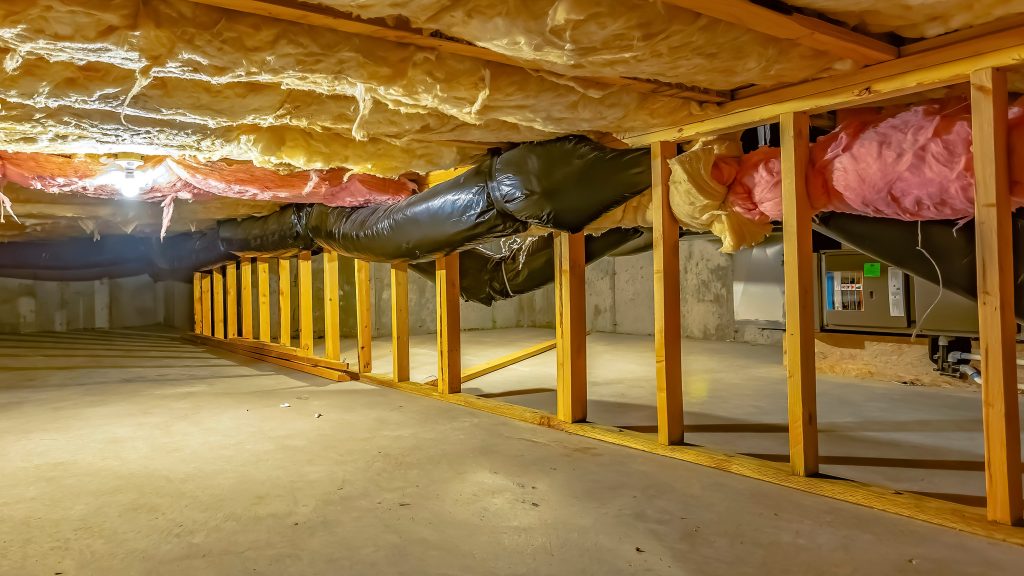 Option 2 — Insulate the Walls of the Crawl Space

Firstly, by insulating the walls, you’re bringing the crawl space into the thermal envelope. This means that any ductwork running through the crawl space will not suffer from heat loss.

Likewise, an encapsulated crawl space is a dry crawl space — and that’s a colossal step toward protecting the home and all its components from moisture damage.

Finally, crawl space walls have a smaller surface area than the home’s main floor (500-550 ft2 as opposed to 2,000 ft2), and are typically less expensive to insulate.

So, overall, encapsulating a crawl space by creating an insulated envelope at its walls is typically the better, more effective solution than just insulating the underside of the main floor.

If you’ve decided to encapsulate the crawl space, the next step will be to zero in on the most effective insulation product. Below, we’ll give you a quick overview of the popular insulation options for crawl space walls. 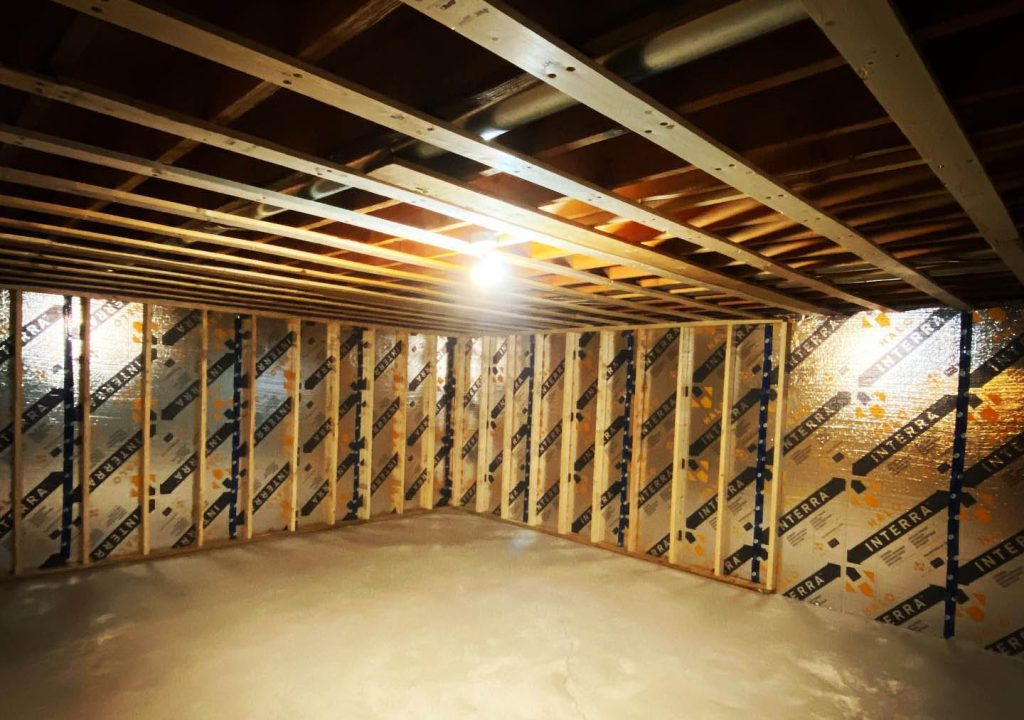 Halo Interra FR is an excellent option for insulating a crawl space. Interra FR is a low-density (<10PSI) Neopor Graphite Polystyrene (GPS) foam board with a reflective laminate on one of its sides. Here are a few of the benefits Interra FR offers when used as crawl space insulation: 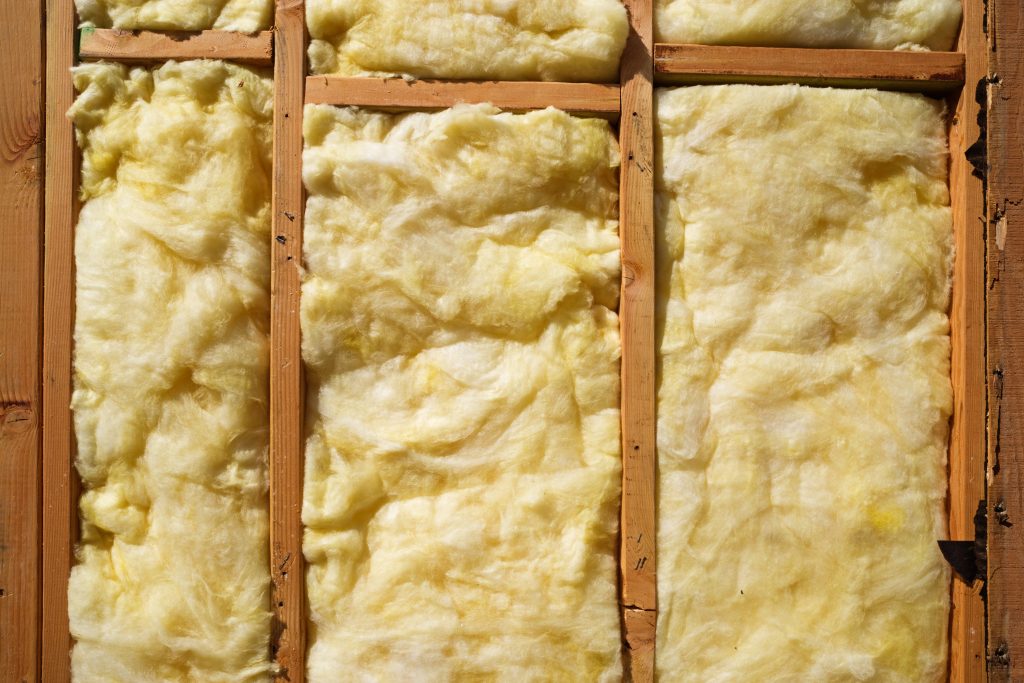 Batt (aka “The Diaper”) is not an ideal insulation product for crawl space walls — especially when used on its own, without any rigid insulation. It’s not the optimal option because batt needs to be compressed and pinned during installation, and this compression lowers the R-Value.

Also, batt insulation does nothing to stop air leakage (unlike a laminated, rigid foam product). Batt is also prone to absorbing moisture, which can cause the insulation (as well as parts of the wood frame) to rot over time. 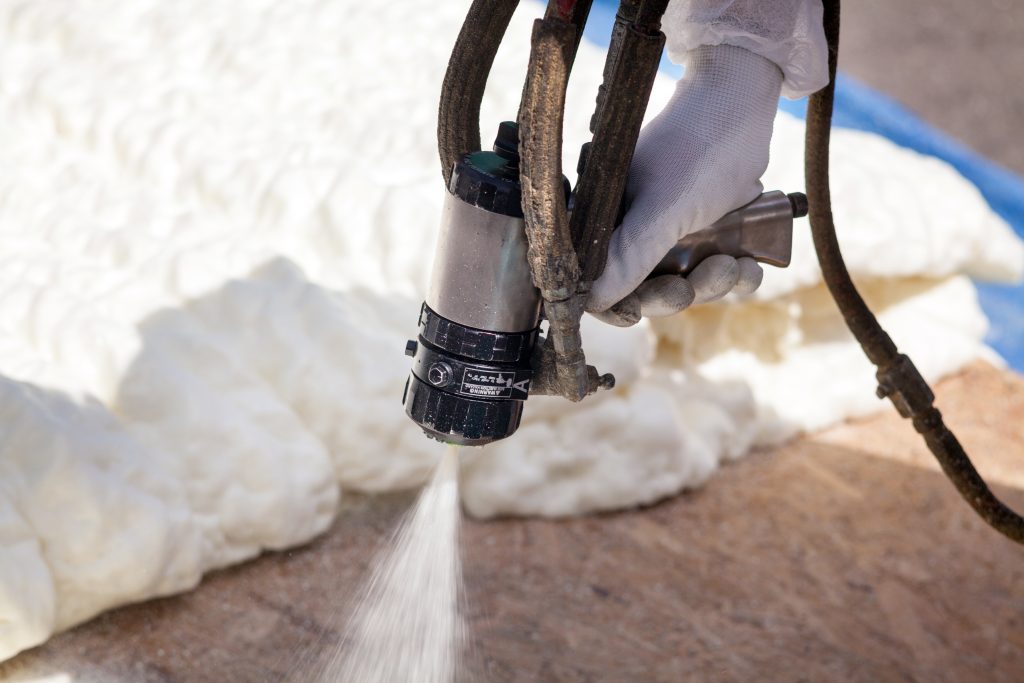 Spray foam insulation is commonly used to encapsulate crawl space walls. However, its application can be rather troublesome.

First of all, spray foam requires special equipment to be applied and its costs are high compared to other insulation options.

Another issue with spray foam is that it bonds to other building components. For this reason, misapplication errors are costly — the spray foam molecules embed themselves into any building materials they come in contact with, and any misapplied foam is difficult to remove.

Other Foam Board Insulation Products

Apart from GPS, there are a few foam board insulation products that are often used to encapsulate crawl spaces. Here’s a list of the most common ones:

Crawl spaces can be a lucrative market, whether you’re building new ones or renovating.

In this post, we’ve explained why insulating crawl space walls is the best strategy for protecting homes from heat loss and moisture ingress.

We’ve also shown you how different insulation products work in a crawl space application and the variety of benefits that Interra FR specifically offers.