How to Reduce Costs on the Job Site with Subterra® Plus. | BuildwithHalo.com 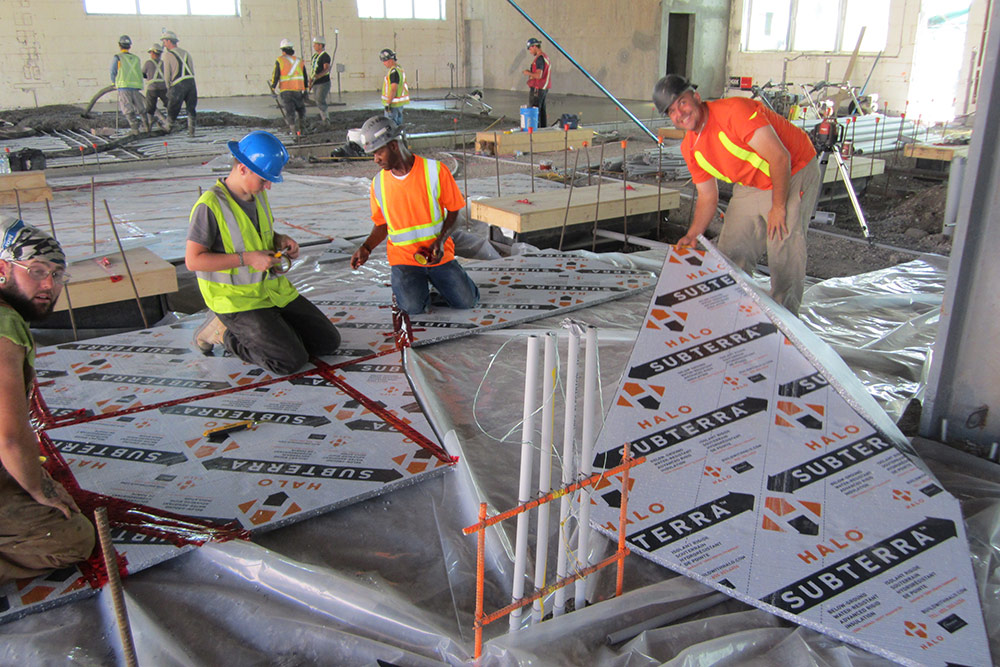 How can you reduce construction costs on the job site?

GCs and trades want to keep expenses low so that margins — and profitability — remain high. Developers and homeowners, too, want to keep their costs low (while still getting a high-quality product).

So, what’s the solution?

To this end, material choice is a highly important decision. But we’re not just talking upfront cost. You also need to think about the material’s ability to hold up during the build. If fragile materials fail or break in mid-project, then these spoilage costs and unexpected delays extend the project’s duration and increase your construction costs.

If you’re looking for rugged foam board insulation for below-ground applications (from perimeter insulation to grade beams) Halo Subterra® Plus is the answer. It’s so darn tough that it translates into actual cost savings on the job site (however, there are a lot of other benefits of this product as well, including long thermal performance).

Benefits of Halo Subterra® Plus

How Subterra® Plus Is So Tough (How It’s Made)

Subterra® Plus has a forgiving GPS foam core that’s reinforced on both sides with incredibly tough cross-woven technology.

GPS is quickly becoming the new standard in thermal insulation. It’s also the leading choice of insulation in Europe (and has been for several decades).

GPS outperforms XPS on breathability as well as R-value and air and vapor permanence and even water absorption, even though XPS often markets itself as having superior water absorption. However, the industry study used to support this does not accurately reflect real world conditions because it only shows the short term and neglects to account for long term benefits of the permeability of GPS. Of course, they don’t like to tell people this.

The buildings will be constructed with a concrete foundation (piers/footings and grade beams with structural slab), structural steel with steel stud and infill superstructure and a sloped OWSJ with a metal roof system. Halo® Subterra® is being utilized on the underside of the slab to provide the required insulation values in this northern climate zone.

We interviewed Zeb about why he chose Subterra® Plus and this is what he had to say:

Interviewer: Why was Subterra® spec’d into this project? Who chose Subterra®?

Zeb Hudon: “During the tender process the product was approved as an acceptable alternate to the XPS product originally specified. Penn-co carried Subterra® as the product of choice, due to the local availability/manufacturer and also due to the quality of product and its superior properties.

One of the things that drew us to this product was its flexibility when compared with its competitors. This flexibility results in reduced waste and increases the opportunities to manipulate the product to reduce costs in other aspects of construction.

One of the examples of this was to eliminate a void form cover board and utilize the insulation already specified in its place. Penn-co worked with AMC to ensure utilizing the product in this manner would not cause issues during construction or after project turnover.”

Interviewer: In your testing, how did Subterra® perform? Did it perform as expected?

Zeb Hudon: “We conducted preliminary tests to ensure Subterra® would support the reinforcing and weight of concrete.

During these tests, a significant point force was applied to the Subterra® surface and we did not experience failure in the product, which gave us the confidence to move forward with the approach on a large scale for each of the schools.”

Interviewer: Will you use Subterra® Plus again?

As you can see, Subterra® Plus is so tough that it translates into actual cost savings on the job site. Add to this its ability to maintain R-value and the reduced amount of waste because of its flexibility, and it’s clear to see why Subterra® Plus is an excellent choice for those looking for insulation for below-ground applications.