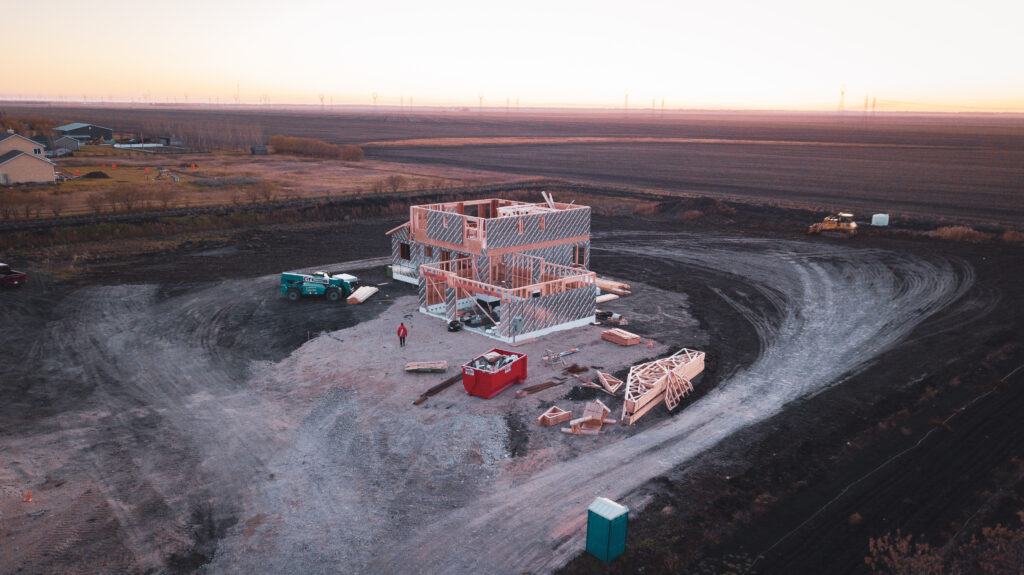 But what will the new building standards mean for us in the construction industry, energy-wise? Well, we’ve reviewed the draft, spoke with a panel of experts, and put together this digest of what we feel will be the upcoming energy changes.

The NBC 2020 is a roadmap to Net Zero Energy Ready (NZER) residential construction in Canada and it offers the choice of two different tiered compliance paths to get there.

Below we’ll walk you through the two paths, explain how they could be implemented by the provinces and offer some examples of how the new standards can be met.

NBC 2020 is going to bring about updates to both the performance and prescriptive approaches. The performance path is arguably more cost-effective and straightforward to follow. It’s no surprise — for instance, according to recent studies, 80% of house builders in the USA opt for the performance path to compliance with energy provisions in.

That said, NBC’s prescriptive path will also provide ample easy opportunities for ranking up in the tiers — especially in Ontario’s predicted adaptation.

Let’s have a look below.

This is the most notable expected change in NBC 2020. Over time, it’s meant to pave the path to a NetZero Energy Ready future.

NBC’s tiered performance path — which is expected to be the most popular once it goes into effect — has 5 tiers. This is in contrast to the NEBC Performance path, where Tier 5 didn’t make it into the 2020 edition but will likely be present in 2024.

Here is a summary of the projected NBC 2020 tiers and their requirements as they relate to the reference house:

Another addition to the NBC’s compliance options, the Tiered prescriptive approach will give builders a chance to advance through levels by gaining a certain amount of points through various envelope enhancements.

How to Get Points Under the Tiered Prescriptive Approach — Examples

As an example of how the tiered prescriptive path will likely work, let’s look at the code’s proposed adaptation in Ontario, where NBC 9.36 is expected to replace SB-12. (For reference, in this province, 20 points will likely be needed to achieve Tier 3.)

If we’re building in the City of Toronto, we could then earn points in the following manner:

How the Code Changes Will Be Adopted By the Provinces

It’s important to note that NBC 2020 itself — like all versions of the national code — is essentially unenforceable.

That’s because the provinces have ultimate jurisdiction over the governing building standards within their borders. In the case of NBC 2020, the provinces have 3 options — they can adapt the code (i.e. change it as they see fit), adopt the code as is, or create their own codes altogether.

So far, all of the provinces have pledged to adopt NBC 2020 within 2 years of publication. The only unknown so far is which tier each province chooses to go with.

Now, we do think we know a bit about the plans of Canada’s most popular province regarding the adaptation of NBC 2020.

In a nutshell, here’s how we think Ontario plans to implement the following provision in response to the NBC 2020 update:

What Does It Mean for Tier 5 (NZR) Homes in Cold Climates?

In this article we’ve talked about the shorter-term implications and the more moderate areas of the country, but what does Tier 5 (Net Zero Energy Ready construction) in a much colder climate zone (Climate Zone 7) look like as imagined by NBC 2020?

Anticipating the changes brought by NBC 2020 and subsequent codes as we get closer to Net Zero Energy Ready, at Logix Brands we’ve introduced a sample wall design that could help builders meet these stricter energy standards in the colder climates in Canada.

We’ve written extensively about this design here, but below is a wall section that we believe could efficiently meet Tier 5 in Climate Zone 7A/7B in Canada.

By about 2030, most provinces should be hitting Tier 5 — Net-Zero Ready. See how using Logix Brands products can get your closer to Tier 5, with passive energy generation systems and high-performance envelopes to meet their energy demands!
Click Here To Read The Full Article
NET-ZERO READY

The long-awaited NBC 2020 is finally rolling out. It’s going to be a roadmap to Net Zero Energy Ready construction in Canada, however, the initial changes to energy standards in the short term are likely to be earth-shattering.

The new code won’t likely eliminate any pre-established paths to compliance; instead, it will introduce new tiered, performance and prescriptive approaches.

But these, in turn, are set to pave the way to Net Zero Energy Ready residential buildings within the next decade.

NBC 2020 was released on March 28, 2022 and you can download it here. It looks like we were pretty accurate with our predictions!