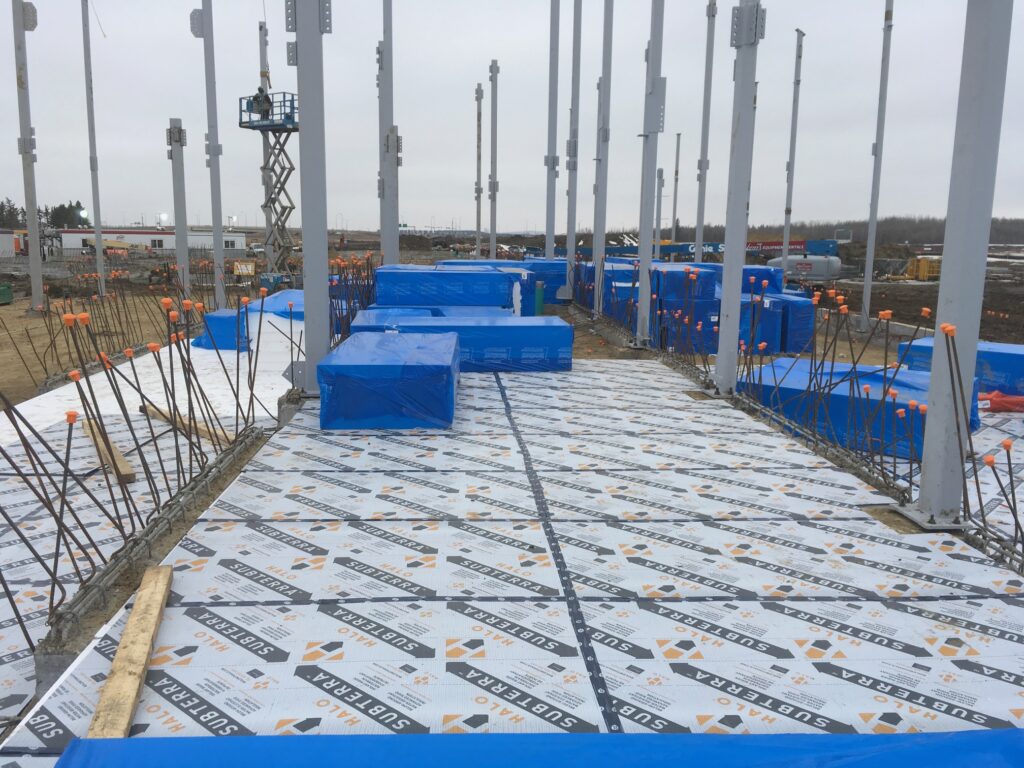 Radon is a hazardous, radioactive gas that’s prevalent across much of North America. But while our building codes have a working solution, what if we told you that there’s a product that performs 7 times better at stopping Radon ingress?

This post will examine the test results comparing the Radon-retarding properties of Halo’s Subterra Plus versus the current code requirement.

Radon Poses a Significant Health Risk in Canada and the US

Radon is a radioactive gas produced by the decay of uranium. It occurs naturally in the soil and groundwater and rises unobstructed through the ground and human-made structures, such as building foundations.

While it’s too diluted to be hazardous outdoors, Radon concentration can quickly build up inside buildings. Prolonged exposure to high radon levels is extremely harmful to human health, and the gas has been directly linked to 16% of all lung cancer deaths.

Previously, it was thought that Radon was only prevalent in specific areas of North America. But after extensive testing, scientists determined that dangerous concentrations of the gas are present in up to 7% of all homes in Canada.

That said, some areas recorded far higher concentrations than others:

That said, some areas recorded far higher concentrations than others:

High levels of Radon are also present in the US: 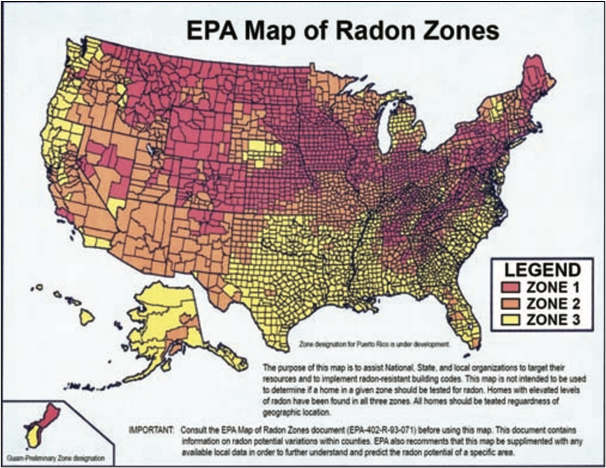 Stopping Radon From Entering Our Homes And Buildings

Without a dedicated barrier and ventilation system, Radon travels freely through concrete foundations and accumulates in buildings. 6-mil polyethylene is the most commonly accepted barrier, often installed under a slab on grade and used in conjunction with a vertical exhaust pipe that allows Radon to escape to the outside. A 6-mil polyethylene membrane — or an equivalent — is the minimum Radon retarder mandated by the International Residential Code (IRC).

But we all know that codes often require only a bare-bones solution. So the 2 lingering questions are:

Can 6-mil poly be trusted to create a permanent, airtight seal that effectively blocks Radon ingress?

Is this minimum IRC requirement adequate in keeping households safe from this invisible, deadly carcinogen, or is there a more robust gas retarder solution? 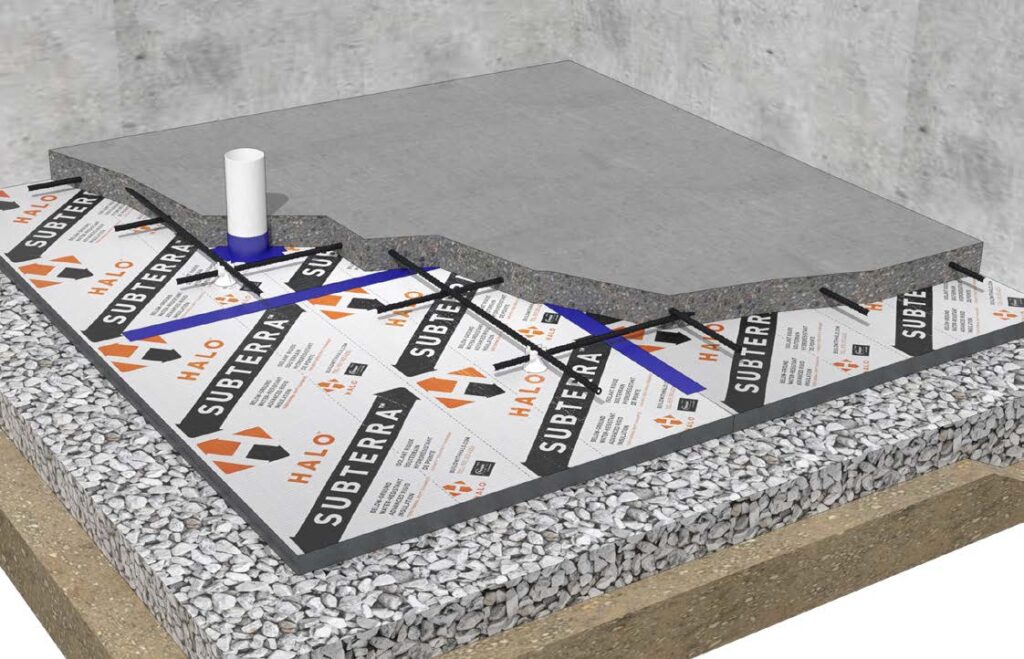 To find out if there is a more effective Radon retarder, the National Research Council of Canada (NRC) tested and compared the performance of Halo Subterra Plus vs. the 6-mil poly. 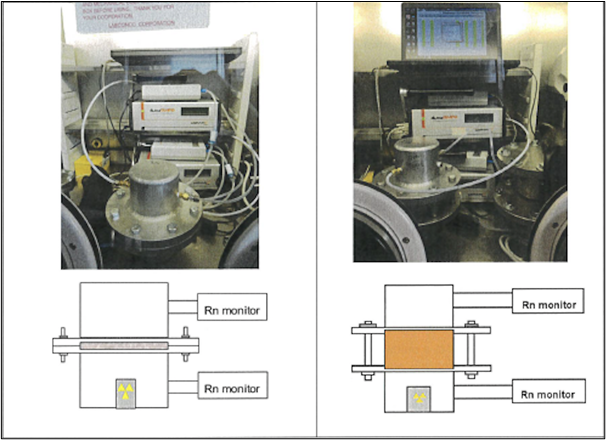 To prevent unintentional leaks from skewing the test data, both samples were sealed and tested for leaks before Radon was released into the dosing compartment. Once underway, the test lasted around 400 hours for each sample before the team analyzed Radon concentration in the receiving compartment. Here’s what the NRC team found as the test concluded:

Based on these independent tests, it’s clear that Halo’s Subterra Plus exceeds the performance of 6-mil poly in blocking the harmful gas while providing under-slab insulation as well!

Halo’s Subterra series is also currently in testing at the NRC laboratory and is expected to pass the test just like Subterra Plus.

These test results are accepted in the US as well as Canada.

XPS insulation products, on the other hand, do not function as the radon barrier. 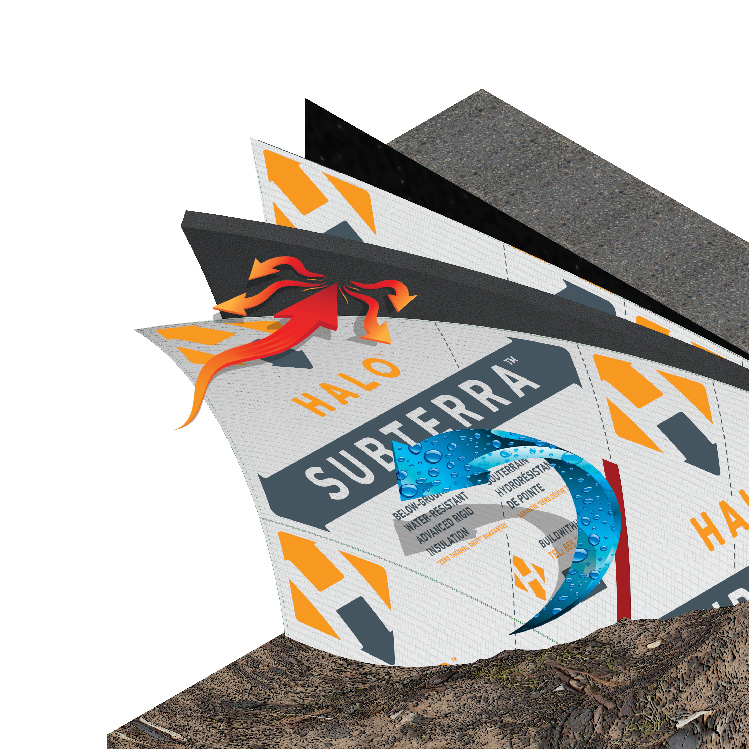 Subterra Plus panels can function as a Radon barrier as either part of a depressurization system or on top of an existing one to further mitigate Radon diffusion. In either scenario, installation is pretty straightforward, but let’s have a look at the required steps for placing Subterra beneath a slab-on-grade:

For more in-depth guidance, you can visit our resources library and check out the Subterra Protection Board Install Guide.

Building codes generally fall a step behind the science.

But that doesn’t mean we shouldn’t adopt better building methods when they become available — especially when it comes to something so critical for human health as Radon mitigation.

Halo’s Subterra Plus products are 7 times more effective than the code-mandated 6-mil poly at stopping Radon.

Save a construction step and choose the under-slab insulation that functions as your Radon Barrier as well! 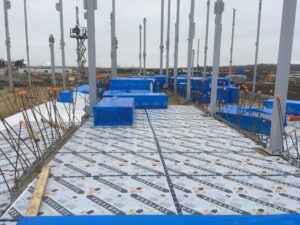 Controlling Radon With Halo Subterra Plus